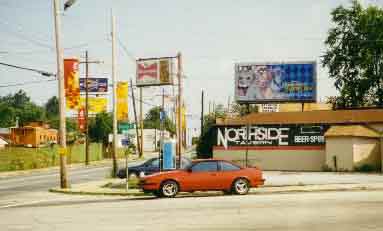 A fixture of the area and a stopping place of refreshment for many years, this lively musical gathering spot has been under continuous ownership by the same family for 35 years.

Ellen Webb, daughter of the original owner and an active leader and supporter of the Atlanta Blues Society, has been the proprietor since 1989. For 25 years (1964-1989) Ellens' father Butler Webb ran the bar until his death in 1989. He was the black sheep of a family of politicians, but instead of running for office he took his talent for bringing people together and opened a tavern. His brother, James Webb and grandfather Paul Webb Sr., were elected civil servants and served Fulton County as County Commissioners.

The area immediately surrounding the Northside Tavern historically was the Miller Union Stock Yards . From the early 1900's to around the 30's and 40's the buildings were mostly wood barns and pens for cattle, horses, mules and other livestock. Many of these structures burned in a 1940s fire according to Howell Station resident Jules Carter.

The 1932 Sanborn Fire Insurance Map says 'wood store' about the building at the present-day location of the Northside Tavern. Although not of historical importance, it is possible that the stucco finish on the Tavern covers a very old building deep beneath many layers of remodelings.

Sign and Building Permits on Record at the Atlanta History Center

In 1967- Paul Pounders obtained a building permit to: 'Replace Awnings on Front.'

In 1975- Northside Package obtained a sign permit for a 4' X 4' to be installed by Henry Neon Company.