National Register listed : 1995
Credits
NOTE: Hastings is still in business in Atlanta. They have quite a nice store on P'tree in North Buckhead. It's a garden store, and I think they have continued the tradition, although I don't think they "make" seed packets any more. They are in the Atlanta phone book at 404-869-7447 or 7448. 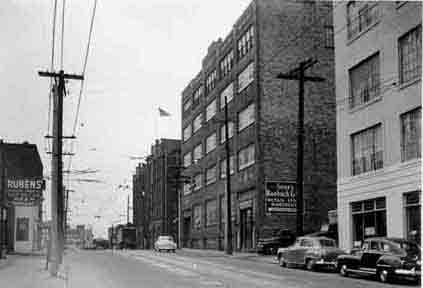 Period of Significance : 1913-1945 (The building was constructed in 1913 and 1945 marks the fifty-year cut-off of historical significance and the period that the building was occupied by its two primary historic industries.)

Boundary Justification: The building is the only contributing Resource

ABOVE: Corner of Hastings' Seed Company beside Gaint Lofts during the 1950s. Photo from the Pullen Archives.

Awards: Award for Excellence in the category of adaptive use/historic renovation from the City of Atlanta Urban Design Commission in 1994.

Areas of Significance: Architecture and Industry:

The F.J. Cooledge and Sons Company-Hastings' Seed Company building is significant in architecture as a good and intact example of a utilitarian industrial design used for manufacturing facilities in the early 20th century. Significant features include the masonry construction, steel-framed factory windows, flared concrete columns, fire doors, exposed concrete ceilings and floors, and wood floors. The widespread use of concrete for structural purposes, as seen in this 1913 building, was unusual for this early date in this type of building in Atlanta.

In Atlanta, this type of historic building, although once common, is now increasingly rare due to demolition for new development or destruction by fire, neglect, etc. The majority of these buildings which survive are located in the Castleberry Hill Historic District (NR) southwest of Atlanta. Others, like this building are found in isolated pockets, usually along railroad lines.

In terms of industry, the property is significant as an example of early 1900s industrial activity in Atlanta. The building was constructed in 1913 for the F.G. Cooledge and Sons Company which was a glass company and paint manufacturer. In the 1940s the property was sold to the H.G. Hastings Company. Hastings published the well-known Hastings' Seed Catalog and shipped and received seeds and gardening materials from this location, as well as operated a retail store that served the entire Atlanta area. In 1982, the building was sold for use as record storage. However, the building remained vacant until 1992 when the current owners bought it.

The building has now been converted into loft apartments and gallery space. The rehabilitation project won an Award for Excellence in the category of adaptive use/historic renovation from the City of Atlanta Urban Design Commission in 1994.

The F.J. Cooledge and Sons Company-Hastings' Seed Company Building is eligible for the National Register under Criteria A and C as an example of early 1900s industrial activity in Atlanta and as a good and intact example of a utilitarian industrial design used for manufacturing facilities in the early 20th century.

The F.J. Cooledge and Sons Company-Hastings' Seed Company Building fronts Marietta Street and abuts the Western and Atlantic railroad tracks in an industrial section northwest of Atlanta. The building was constructed in 1913 by the Mackle & Crawford Construction Company for F.J. Cooledge and Sons, as an industrial building which has housed glass, paint, and seed companies.

It is a four-story, brick building with a basement of load-bearing masonry construction and a poured concrete structural system. The building is functional in design with little stylistic influence or ornamentation.

Exterior features include the original brick, both painted and unpainted, painted stucco, and the steel frame factory windows. There are four vertical rows of windows on the front façade with the first and fourth row windows being alike and having brick window surrounds. The two center rows' windows are larger with just a brick sill and no surround. There are also large display windows on the entrance level. The main entrance is recessed with angled-glass window walls on either side of the glass front door. The painted stucco is on the entrance level front facade. There are three rows of decorative brick between the first and second story.

The building interior is generally open with the first, third, and fourth floors each having one original transverse partition . The first floor also has the original display rooms and offices. The interior features include exposed concrete ceilings and floors, first floor tongue-and-groove floors, steel fire doors, and the concrete columns. There are also exposed mechanical systems throughout the building. The most distinguishing features on the interior of the basement, second, third, and fourth floors are the circular concrete columns with flared capitals and vertical band marks which are evidence of the wood frame molds which formed them. These columns are also known as mushroom columns. The first-floor columns are smoothly finished mushroom columns. The original freight elevators have been converted to regular elevators for access to the upper floors.

A certified rehabilitation was completed on the building in 1994 for use as loft apartments and gallery space. A later one-story building abutting the main building to the south was dilapidated and torn down; however, a portion of the front facade was utilized in building a wall around the secured parking lot.