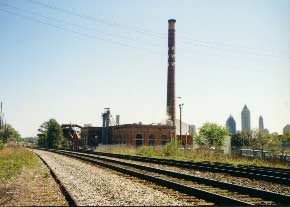 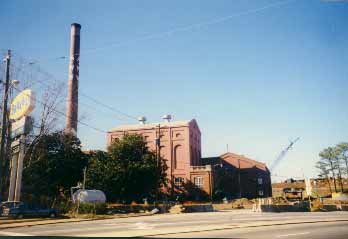 When Atlanta's original waterworks system, built in 1875, became inadequate for the growing city, $500,000.00 of waterworks bonds were authorized for new facilities. Construction contracts for the system, which included the plant on Hemphill Ave. were awarded in 1891. Water from the Chattahoochee River was treated at the new pumping station, using filters from the old South River station. More modern, square filters were introduced in 1932. But the old filters were kept in reserve and used again during W.W. II. Chlorination of Atlanta's water supply was begun in 1917. The interesting brick work and high arched windows of the Hemphill Avenue building are characteristic of the High Victorian Period in Atlanta. This well composed structure, along with its landscaped setting and gazebo park, is a forceful and important element in the now developed and crowded urban environment. 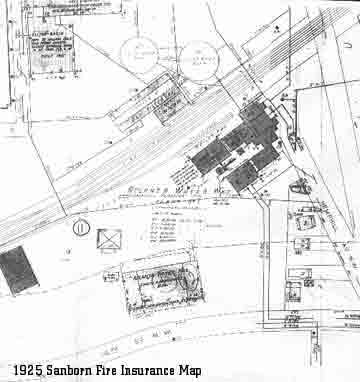 The Atlanta waterworks Hemphill Avenue Station was the second waterworks complex erected for the city and was started in 1892 following a decision by the city fathers to enlarge the then extant system. Due to the demand placed upon the original city waterworks located in the Lakewood Community, the old station could no longer continue as the city's only source of water. As a result, the Hemphill Avenue Station was proposed to draw badly needed fresh water from the Chattahoochee River a short distance away. Together with the Lakewood Station, the new station was expected to supply all of the water that Atlanta would need for some time to come.

The original waterworks building was constructed to serve a large reservoir located on some 55 acres just beside old Howell Mill Road. The initial reservoir had a capacity of some 200 million gallons of water and was surrounded by a park complete with a magnificent summer pavilion, according to one source quoted in Garretts' history of Atlanta.

The firm of S.B. Mosby and Company of Virginia was responsible for the construction of the initial waterworks project which has been enlarged and improved several times since. The Mosby Company employed teams of workers of all sorts under the direction of Chief Engineer Joel Mable who directed the on-site work of the firm. The actual facilities were designed by engineer Robert M. Clayton, City Engineer, and William G. Richards.

In 1893, the Council committee on Waterworks reported on the Hemphill Station and said in part: "...The work of construction on the new city water plant is about complete and since September the water supplied to the city has been pumped from the Chattahoochee River.... It is notable that the works built within the estimate ($750,000), though there has been a second engine bought and erected at the reservoir station and a house erected over the filters that were not considered in the original estimate of cost made by the City Engineer. Your committee feels that the city is to be congratulated in having this complete and permanent water supply, and the thanks of the are due the Board of for their earnest and constant attention to the work.

Not withstanding the significance of the Hemphill Avenue Station to the city of Atlanta as its second water processing complex, this water- works plant also stands as a good example architecturally of the late Victorian style as applied to an industrial complex. The structure and its landscaped setting also provide relief to the surrounding commercial environment through nicely detailed brick facades of the building and the open green space which surrounds it.

The Atlanta Waterworks Hemphill Avenue Station is a red brick structure which compositionally has two large sections of several stories connected together by a lower, entrance block. Of the two large sections of the buildings, the wing closest to Hemphill Avenue is the tallest rising some three full stories in height the other block of the building is two stories in height. These portions of the building complex house both the administrative and engineering offices of the Works as well as certain necessary machinery for the operation of the plant.

The taller block of the complex was erected in 1908, yet was in such a manner as to be almost indistinguishable stylistically from the earlier lower block which was erected in 1892. A one-story entrance wing divided into three bays and topped by a balustrade strands just in front of the three-story block. Each bay has a flat arched opening which contains paired 3-by-4 metal framed windows in each end bay and a modern storefront type glass door in the center bay. The balustrade across the roof line is divided into sections by piers that compositionally are extensions above the cornice, of the facade pilasters that separate the bays of the one-story wing. Behind the entrance wing, the facade of the high block is also divided into three bays separated by wide brick -pilasters. The facade of the three-story high block is almost Renaissance-like in compositional qualities, though. For instance, three arches are recessed into the facade between the brick pilasters and an attic story of sorts containing segmented arch recesses is separated from the full arches by means of -a horizontal band of brick that is corbelled. Above the attic Story is a pedimented gable of brick complete with circular attic window.

The one-story entrance wing also serves to connect the larger block with a somewhat smaller two-story block containing the turbines used in the waterworks facility. This smaller block is oriented at right angles to the rest of the facility and like the other wing of the building is divided into bays, each containing a window separated by broad brick pilasters. The windows in this portion of the complex are in two parts : the upper consists of a 6-by-4 metal framed glazed opening with a surmounting radial fanlight the lower portion, separated from the upper by a recessed brick panel contains paired 3-by-4 windows. The roof of the entire complex is metal.

The building is set within a park space surrounding the reservoir. 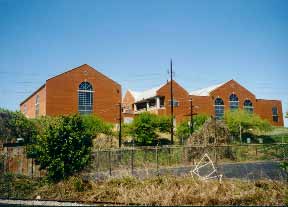 At right is a new addition a few hundred feet north of the present facility. The lean, elegant, classical lines of the original have not been replicated.