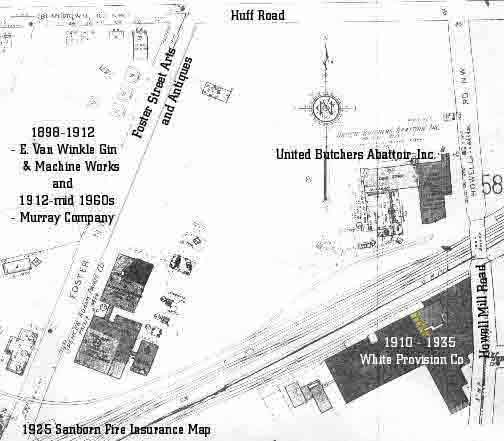 Renovation Architect : A very contemplative and thoughtful renovation by Zunolite Road Properties developer Michael Phillips with consultation by Smith-Dalia Architects
There will be 3 phases :
Phase I : Redevelopment of existing (see Floataway article below).
Phase II & III: New buildings including a Grocery Store and Pharmacy.

Of Note is Space 1181, located on the southeast corner of the Tucker Mott property, an event gallery space designed by Nicholas Storck Design Studios. As described in Creative Loafer Arts and Entertainment : There's a new gallery just off 14th street in Atlanta that can be reached only by descending a hidden roadside stairway engulfed in Kudsu. Covered up in vines and a few feet from the railroad tracks, space 1181 is the proper setting for a Gothic interlude.... 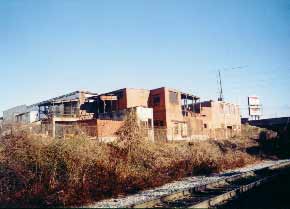 1998 photo is of the Abattoir/Stoval Company Building's southern elevation. The lower story is in the active process of being converted into a 1940s nightclub by Tucker- Mott Development..

This following is a mid-December 1998 article from the Atlanta journal Constitution:

Developers behind the redevelopment of the old Floataway buildings near Emory University are about to bring another infill project to midtown. Tucker Mott Cos., whose principals are Michael Phillips, Katie Bollman and Arnold "Arnie" Silverman, has assembled 9 acres on both sides of Howell Mill Road, just south of Huff Road. Tucker Mott plans to convert the old Stovall & Co. building and several surrounding buildings into a neighborhood retail center with about 100,000 square feet of shop space combined with office space and a 50-room boutique hotel.

"I feel like Atlanta needs a really good urban retail environment - something with a lot of character that's not just another strip center," Phillips said.The Stovall building will be converted into offices and retail shops surrounding a courtyard in the center of the building. Tucker Mott will work with an operator to create a 1940s lounge in the building's lower level. Preliminary plans call for a mix of bars and restaurants with a tearoom, coffeehouse and out-of-the-ordinary retail shops.

The project will retain the historic nature of the property, which features a hillside setting with a clear view of downtown Atlanta. Several buildings housing a string of antique stores on the east side of Howell Mill will be refurbished, and existing tenants will stay in place to help set the tone for the development. "Atlanta's backbone is here," Phillips said, noting the nearby railroad tracks carry trains by the project twice a day. (Authors Note-It's a lot more than twice a day.) 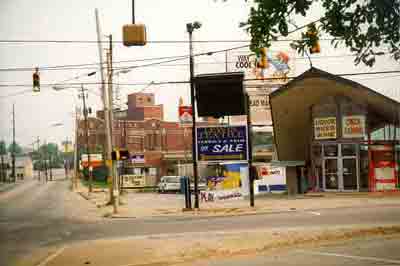 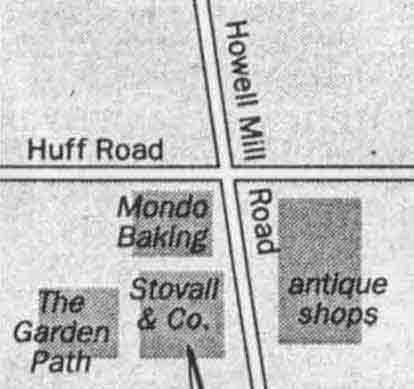 1998 photo is looking at the Abattoir/Stoval Company/Tucker Mott Development from the north. The liquor Store is going to be readapted as the Mondo Baking Coffeehouse.

Map is from same A. J. C. newspaper article as the text.

Anne Quatrano and Cliff Harrison, the duo behind Buckhead's ritzy Bacchanalia restaurant and its sister, Floataway Cafe, will open a 10,000-square-foot gourmet grocery store and pasta restaurant that will be called Star Provisions, Phillips said. The former liquor store on the southwest corner of the intersection will be converted into a coffeehouse called Mondo Baking. Proprietor Jane Thompson hopes to open the coffeehouse/newsstand in March, serving carryout breakfast and lunch.

Phillips and his partners want to create a community environment, featuring weekend events like a farmer's market, to galvanize the loft dwellers and residential communities in north Atlanta. "We're two miles from every good neighborhood in town," he said, referring to midtown, Ansley Park, Collier Hills and Buckhead.

Tucker Mott a company that was named after the great grandfathers of Phillips and Bollman, will lease space behind the old Stovall building to Tim Bergstrom, president of The Garden Path Inc. Bergstrom will open a garden center and continue to operate his landscaping business from the new location, providing pansies and topiaries to daily customers and continuing to specialize in landscape design. "We're not trying to compete with Pike's," he said. "This will be more upscale than that."

1998 photo is of the Stoval/Abattor Building's Eastern elevation from Howell Mill Road with the White Provision Building in the background.

The developers intend to create a retail hub without the typical strip mall aesthetics. "We don't want all the buildings to look the same," Bollman said. Phillips and Bollman were the developers behind the renovated industrial site of Floataway Products Inc. across from Sage Hill Shopping Center at the corner of Briarcliff and Clifton roads. They have since been joined by Silverman, principal of Silverman Construction Services and brother of Robert Silverman, chairman of The Winter Group of Cos. "His company acts as our construction arm," Phillips said. Silverman, who served as Winter's President and chief operating officer before selling his interest in 1995, was the second person to lease space at the Floataway Project. "I see the vision and incredible way Katie and Michael handle development, and I think I complement it," he said.

Developmental history / historic context :No significant research has been done on this building except casual conversation with a longtime employee of Stoval, Mike Vickery. The 1932 Sanborn Fire Insurance Map at the top of this page shows this building to have the same configuration as presently. A 1911 Sanborn map shows this same business name at 1008 Brady Avenue.

1971-1998 : Stoval Lawn Mower Sales and Repair. The ex-owner Paul Stovall Jr. is reputed to have information and blue-prints pertaining to the history of this building.

Description of present and historic physical appearance: Present day color photos above taken from the north with the White Provision Building in the background and south from the railway track.