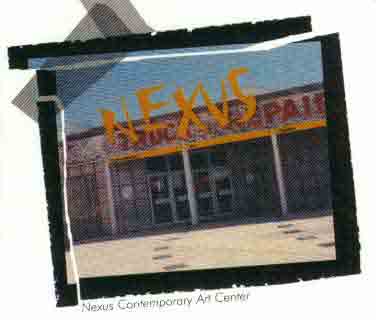 The following text and graphics are scanned from the December 1998 Nexus Annual Fund publication sent to friends and members:

Nexus' history is legendary. 1998 was milestone for Nexus and the Atlanta arts community Nexus turned 25! The center has been a hub of artistic activity and creativity since the early seventies. With the move to Means Street in 1990, Nexus become a catalyst for urban renewal and the development of a new arts district. The renovation of the Nexus complex (gallery, press, artist studios, courtyard and offices) was a marriage of a vision for contemporary art and a commitment to historic preservation.

Nexus celebrated its Silver Anniversary with a number of great festivities including the art center's 25th Anniversary Gala in April. The Gala solidified Nexus' role as the premier contemporary art center in Atlanta. Highlights of 1998 gallery exhibitions include: 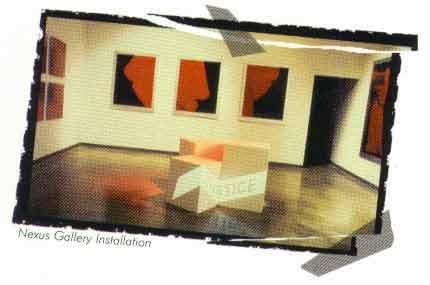 Boy Toys proved to be one of the most popular shows of the year. Combining robotic sculpture with fetishistic installations, the show proved thrilling and disturbing in equal measure.

Desert Cliché: Israel Now ---Local Images was Creative Loafing's Critics' Choice for Best Art Exhibition of 1998. The Avant Guard Revisited was an extremely successful exhibition of a strong group of Atlanta artists. The show served as a wonderful backdrop for our Anniversary Gala in April, drawing an audience of both old and new.

Le Movement Quoticlien: An Aspect of French Art in the Nineties traveled to Nexus from the Grey Art Gallery at New York University. The exhibition received rave reviews and created a cross-cultural dialogue on artistic developments in France and the U.S. 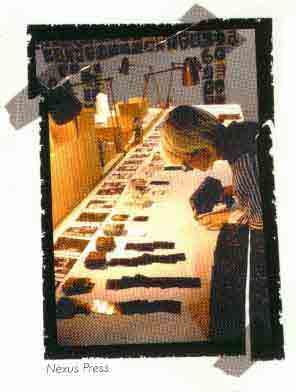 Nexus Press built on the reputation that it enjoys as the only sponsoring artist book press in the U.S. The press received the Lopresti Award from the Art Libraries Society of North America for excellence in publishing Shinro Ohtake's books AT lanta 1945 + 1950.

Analemmic: An Equation of Time, an artist book created with the residency of Leslie Bellevance and Darya von Berner's Lupus Viator Atlanta a meditative, gridded photographic journey, were completed in 1998.

Screenings of The Cremaster Series by internationally renowned artist Matthew Barney were presented by Nexus in 1997 & 1998 to sold-out audiences. His visually seductive films bombard the viewers with a series of biological and metaphysical transformations.

Nexus worked with 4th and 5th graders at Fowler Elementary School for the 1998 Family History Artbook Project. The books were on display in the Nexus Coca-Cola Classroom in the Spring and Summer and were shown at the Youth Art Connection.

Dia de Reyes, Three Kings Day, was attended by about 500 children from the Latino and Hispanic community. The day of storytelling, music, and fun brings together children from diverse cultural backgrounds.

A Walk through the Desert - Israeli Culture Family Day brought many families to Nexus to celebrate Israeli history and art. It was held in collaboration with the Consulate General of Israel, Jewish Educational Services and the Jewish National Fund. 1999

Reading Art is a major historical survey of artists books from Dada to Fluxus and beyond. The show highlights the legacy of Nexus Press and includes a symposium, Futures of the Book, which juxtaposes the avant garde book arts with developments in new technologies of hypertext, CD-ROM, and the Internet.

1999 Atlanta Biennial will give audiences an opportunity to discover emerging Atlanta-based artists. The show will feature an array of highly talented artists working in a variety of media. Nexus invites viewers to discover tomorrow's Monet today!

From Your House to Our House, an exhibition in the Fall of 1999, will feature community-based architectural projects by David Hommons and Sam Mockbee of the Rural Studio. (Web Author's Note : Sam Mockbee will also lecture for the Atlanta Chapter, American Institute of Architects in November of 1999. He's done some fabulous work. Call P.Scott Southerland of Culpepper McAuliffe and Meaders at 404.872.3900 for further information on this lecture).

Nexus' commitment to showing the best of the international visual arts is reflected in 1999 projects by Ilya Kabakov, the renowned Russian conceptualist artist, paintings and films by James Herbert, and a solo project by artist and filmmaker Stan Douglas.

Visiting artist presentations will include the Houston-based duo, The Art Guys, known for their hilarious objects and performances which lie somewhere between the Marx Brothers and Marcel Duchamp.

The 1999 ArtParty should prove, once again, to be the place to see and be seen, in September always filled with cutting edge art and entertainment for everyone Come enjoy an evening to remember with contemporary art, music, great food, dancing and more.